IC50 values are widely used measures of compound potency. A multi-parametric analysis of dose-response curves derived from a panel of breast cancer cell lines treated with anti-cancer drugs reveals that there can be systematic variability in dose-response parameters across drug classes and cell types, effects that are not apparent by inspection of IC50 values. 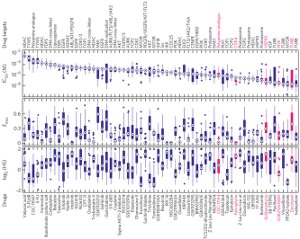 Large-scale analysis of cellular response to anti-cancer drugs typically focuses on variation in potency (IC50) assuming that it is the most important difference between effective/ineffective drugs or sensitive/resistant cells. We took a multi-parametric approach to analyzing a large set of dose response curves generated in the Gray Lab and reported originally in Heiser et al. with additional help from Nick Wang. Our approach involved analysis of the slope of the dose-response curve (HS), the area under the curve (AUC) and the maximum effect (Emax). We found that some of these parameters vary systematically with cell line and others with drug class. For cell-cycle inhibitors, Emax often but not always correlated with cell proliferation rate. For drugs targeting the Akt/PI3K/mTOR pathway dose-response curves were unusually shallow. Classical pharmacology has no ready explanation for this phenomenon but single-cell analysis showed that it correlated with significant and heritable cell-to-cell variability in the extent of target inhibition. We conclude that parameters other than potency should be considered in the comparative analysis of drug response, particularly at clinically relevant concentrations near and above IC50.

We encourage readers to explore the findings and the data underlying this study through the associated project exploration website, which presents the data through several customized data browsers. Through the links below, readers also can access the original datasets containing raw images and calculated metrics for the underlying dose-response analysis, as well as the software for the interactive data browsers developed for visualizing these data.

NIH LINCS grant U54 HG006097 to PKS; Stand Up to Cancer grant AACR-SU2C-DT0409 to PKS and JWG; and a Merck Fellowship of the Life Sciences Research Foundation to MF-S.