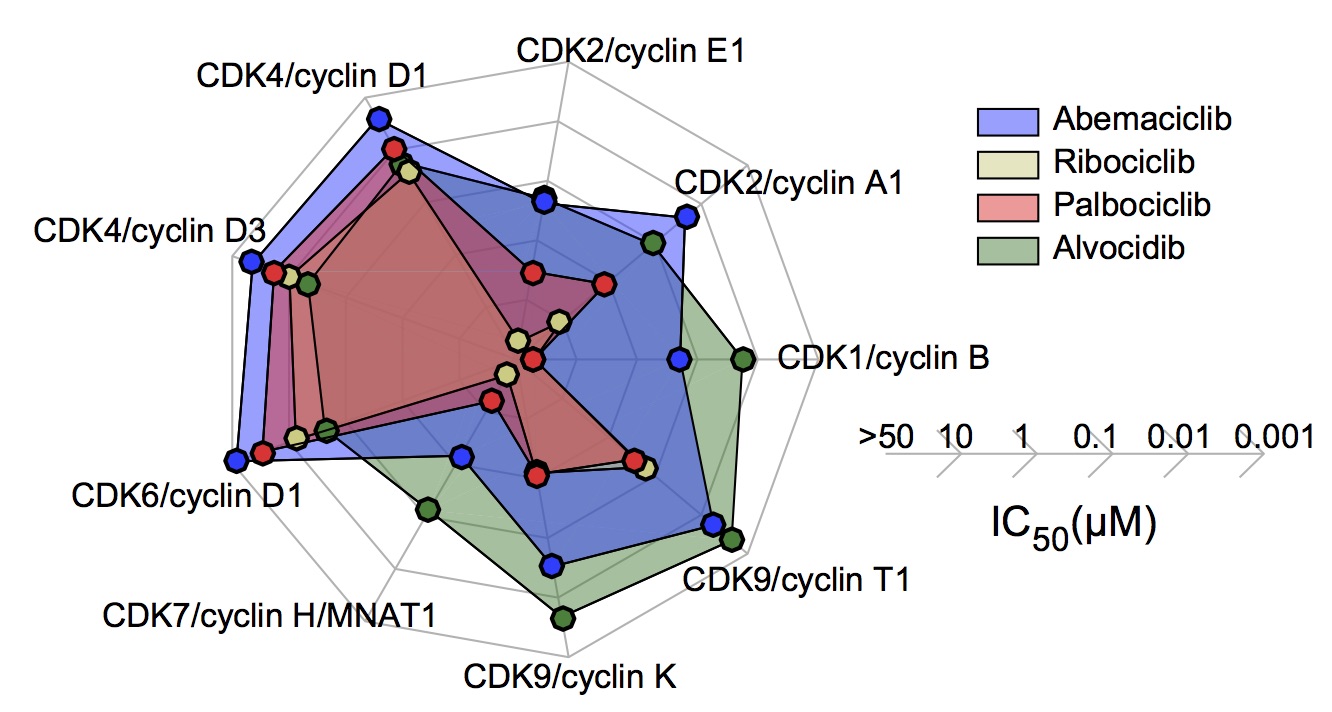 Over-expression of cyclin-dependent kinase (CDK) proteins, leading to dysregulation of the cell cycle, is common in solid tumors including breast cancer. Drugs that inhibit CDK4 and CDK6, including palbociclib (Ibrance®), ribociclib (KISQALI®) and abemaciclib (Verzenio®), are currently regarded as some of the most promising new treatments for hormone receptor-positive breast cancer. While emerging evidence suggests that these drugs differ in the clinic, their target profiles and biological activities have not been directly compared. We analyzed palbociclib, ribociclib, and abemaciclib using five complementary experimental approaches and found that they have substantial differences in biological activities and secondary targets in breast cancer cell lines. Multiple lines of evidence suggest that inhibition of additional CDK proteins by abemaciclib may be therapeutically advantageous.

The target profiles of many drugs are established early in their development and are not systematically revisited at the time of FDA approval. Thus, it is often unclear whether therapeutics with the same nominal targets but different chemical structures are functionally equivalent. In this paper we use five different phenotypic and biochemical assays to compare approved inhibitors of cyclin-dependent kinases 4/6 – collectively regarded as breakthroughs in the treatment of hormone receptor-positive breast cancer. We find that transcriptional, proteomic and phenotypic changes induced by palbociclib, ribociclib, and abemaciclib differ significantly; abemaciclib in particular has advantageous activities partially overlapping those of alvocidib, an older polyselective CDK inhibitor. In cells and mice, abemaciclib inhibits kinases other than CDK4/6 including CDK2/Cyclin A/E ¬– implicated in resistance to CDK4/6 inhibition – and CDK1/Cyclin B. The multi-faceted experimental and computational approaches described here therefore uncover under-appreciated differences in CDK4/6 inhibitor activities with potential importance in treating human patients.

Datasets and Associated Metadata and Code