Adaptive responses to RAF/MEK inhibitors are analyzed systematically across a panel of BRAFV600E melanoma lines to reveal a role for cell-to-cell variability induced by the JNK/c-Jun pathway and other factors in adaptive drug resistance. 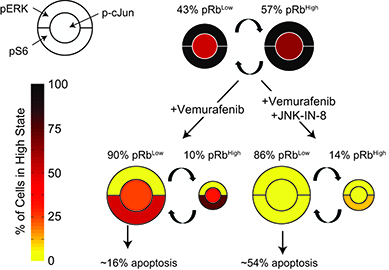 Drugs that inhibit RAF/MEK signaling, such as vemurafenib, elicit profound but often temporary anti-tumor responses in patients with BRAFV600E melanoma. Adaptive responses to RAF/MEK inhibition occur on a time scale of hours to days, involve homeostatic responses that reactivate MAP kinase signaling and compensatory mitogenic pathways and attenuate the anti-tumor effects of RAF/MEK inhibitors. We profile adaptive responses across a panel of melanoma cell lines using multiplex biochemical measurement, single-cell assays and statistical modeling and show that adaptation involves at least six signaling cascades that act to reduce drug potency (IC50) and maximal effect (i.e. Emax <<1). Among these cascades we identify a role for JNK/c-Jun signaling in vemurafenib adaptation and show that RAF and JNK inhibitors synergize in cell killing. This arises because JNK inhibition prevents a subset of cells in a cycling population from becoming quiescent upon vemurafenib treatment, thereby reducing drug Emax. Our findings demonstrate the breadth and diversity of adaptive responses to RAF/MEK inhibition and a means to identify which steps in a signaling cascade are most predictive of phenotypic response.

We encourage readers to explore the data and findings of this study through the associated project exploration website. To promote independent analysis, we also provide access through the links shown below to much of the raw data and model parameter data for this study.